I've been reading City of Glass for the last couple of days now.  I'm at about page 100, it's good so far I just haven't had much time to pick it up.  I recently put aside Chelsea, Chelsea, Bang, Bang by Chelsea Handler.  I just don't think I was in the mood to read it, I'll probably pick it up later.  I loved her first two books, I'm sure this one is good too.
I'm deciding whether I should participate in April's Read a Thon.  My husband is encouraging me to give it a go, he's even offered to have a go also.  He's not a reader, but he might be turning into one. LOL!  He's read more books than me since January.  He's currently on book four.  Right now he's reading The Lost Symbol, and is loving it.  He picked up a book that I was suppose to review, and never got around to.  It doesn't seem like my type, so he'll be reviewing for me.  Keep on the lookout for his very first review EVER.   He seems a little antsy about it, he doesn't want to disappoint.
Hope everyone has a good week ahead.
Melissa
Posted by Melissa at 9:18 PM 1 comment:

I was checking out my 2010 Books I've read list, and notice there are quite a few books I hadn't reviewed, so I thought I'll do some mini reviews.

A quick cute read.  I love Jane Austen, and this book has a touch of her work.  Julie's friend, Ashleigh is obsessed with everything Jane Austen, especially Pride and Prejudice, and when Ashleigh has this grand idea to sneak into a boy's private school to find their Darcy's the fun begins.

I really liked this book.  I'm a huge music fan..I can listen to music all day.  Rob Sheffield does a great job connecting music to what was going on in his life.  I could relate so much, because I often remember significant, and not so significant moments by what was playing in the background.  This book is a soundtrack to a time in his life, that was joyful, and sad.

Another great book.  I tried reading this before and for some reason I couldn't get into it, but when I opened it a second time I quickly got engrossed in it.  I felt it was somewhat of a mystery.  I really wanted to know what had happen to Margo.  Margo was a great character...selfish, but written well.  The writing and story kept me reading nonstop.

I disliked this book soo much.  Basically lets put everything that is somewhat different in one person to show how unique and carefree they are.  I got the point, people are different and we shouldn't judge.  Sure I liked the moral of the story, but did the writer have to make it so thrown in my face obvious. It just left a bad taste in my mouth.

In February I took a much needed vacation...destination, New York City.  I had always wanted to go, and well, someone thought I deserved it and took me.  I absolutely loved it there!  I would love to move there...I would even be a dog walker.  Whatever it takes!  Of Course, I had to make a trip to The Strand.  A readers dream! 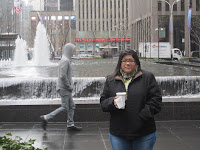 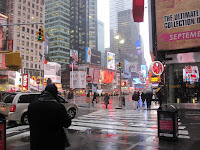 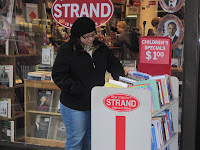 October Breezes by Maria Rachel Hooley
Skye Williams knows everything there is to know about mistrust: Dad skipped out when she was five. And now Warren Jacobs tries to sweep her Mom off her feet. But Warren's not the only concern rocking Skye's world. Devin Abbott, a guy she's known since kindergarten, has changed. He's become a tall, broad-shouldered guy she might date-if he wasn't her best friend. Skye swears there's nothing between them, but everyone else thinks differently. Devin doesn't act the way he used to, especially when Kellin Jacobs, senior quarterback, asks Skye out. Flattered, she accepts, and, Devin sulls up-and he isn't the only one. Kellin's best friend, Tyler Rutherford, gets bent out of shape, too, as he's always wanted Skye for himself. When Kellin and Skye attend one of Tyler's famous parties, neither senses the impending disaster that will change not only her life but also that of everyone who loves her.
~~~~~~~~~~~~~~~~~~~~~
October Breezes is a great YA book that has some pretty serious topics.  I kinda knew where the story was going but that didn't make it any less interesting.
I'll start with the characters.   Though I felt Skye could be way immature at times, she is slightly complex, and is definitely dealing with major issues throughout the book.  I felt for her, and what she was going through.  Devin was Skye's "Ducky".  If you've seen Pretty in Pink then you know exactly what I'm talking about.  He played the best friend that secretly, but obviously in love with Skye.
Now for the story...wow!  Like I mentioned earlier it was similar to Pretty in Pink, just more tragic.  The whole them versus us was in play throughout the whole book.  Kellin and Tyler are in a totally different circle that Skye and Devin  are in, so when  Kellin asks Skye out people start talking, and wondering what's the catch.
October Breeze is a quick read and for only 99. on kindle, what a bargain.
Posted by Melissa at 10:12 PM 2 comments:

It's really unbelievable, but I haven't read one book since the beginning of January.  I've tried, but for some reason I can't get into it.  I'm not sure if it's the books I've picked up (i've picked up 2) or if it's just reading period.

Funny thing is Jesse just bought me a kindle and I've read maybe 10 minutes on it since I've received it.  I got it on Monday.  I need suggestions, any.  If you know of a book that was extremely unputdownable please let me know.  I have many in my TBR...heres the link to my TBR shelf in Goodreads. link  If you spot something on there that will just blow my mind, TELL ME!