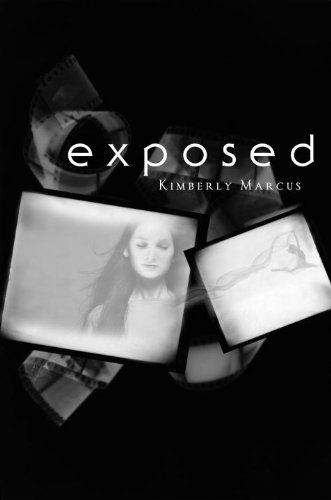 Sixteen-year-old Liz is Photogirl—sharp, focused and confident in what she sees through her camera lens. Confident that she and Kate will be best friends forever.

But everything changes in one blurry night. Suddenly, Kate is avoiding her, and people are looking the other way when she passes in the halls. As the aftershocks from a startling accusation rip through Liz's world, everything she thought she knew about photography, family, friendship and herself shifts out of focus. What happens when the picture you see no longer makes sense? What do you do when you may lose everything you love most? Told in stunning, searingly raw free verse, Exposed is Kimberly Marcus's gut-wrenching, riveting debut and will appeal to fans of Ellen Hopkins, Laurie Halse Anderson and Virginia Euwer Wolff.

I don't know if I've ever mentioned that I am not a fan of verse novels.  I went ahead and gave Exposed a try, and was left disappointed by it.

Who is Liz? I don't really think I was able to get a grasp of who she was.  I know she loves taking photos, and she's heartbroken about what is going on around her, but I just couldn't get a sense of her.  I mostly blame myself for feeling that I am not getting enough content with verse.  Snippets into someone's life just isn't enough for me.

Everything happens and ends so quickly.  Exposed is about a very serious matter, and dealt with in a very mature and realistic way..but darn if I could just let go of my hate for verse.  I felt like I read a rough draft of a what could be a freaking awesome YA novel.

This isn't quite the review I wanted to give.  Obviously, I can't get around the way it was written and I'm finding it very hard to try to put that aside and just give an honest opinion on the written words.

To sum it up, I thought Exposed was lacking depth.