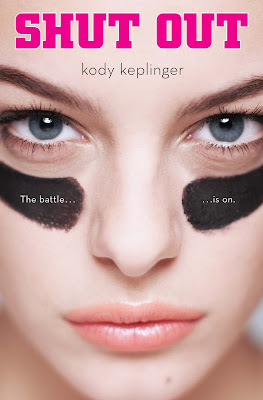 I am huge fan of Kody Keplinger's debut novel The Duff, so obviously I was dying to read Shut Out.  Shut Out is not as great as The Duff but it is still a good read.

Just like her debut, Shut Out is a young adult read that is cutting edge with all the sex talk and language.  Beware of that if you are not a fan of edgy ya books.       It doesn't bother me a bit, but I know for some it does.

In Shut Out the girls shut out the boys from sexual acts and everything in between until they can resolve their feud.  The feud is between the soccer players and football players.  I guess the girls are getting them where it hurts.  Main protagonist Lissa is fed up with her boyfriend, quarterback Randy putting the feud before her, and decides enough is enough.  She gathers all the girlfriends of the football players and soccer players and proposes the sex shut out.  What she didn't plan on was Cash (soccer player) leading the boys in this shut out, or that she would find herself attractive to him.

I liked Cash and Lissa.  Cash was a little mysterious to me, and I enjoyed finding out more about him.  At times Lissa did grate on my nerves, but I will chalk it up to our age difference..lol!  It was predictable, but still enjoyable.