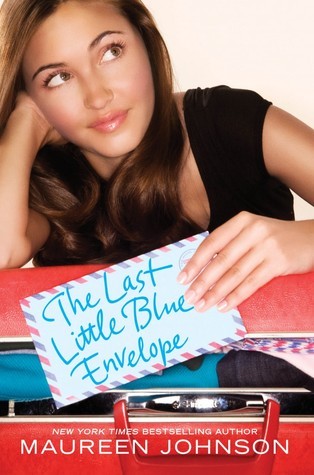 The Last Little Blue Envelope
Author:  Maureen Johnson
Genre:  Contemporary YA
Publisher:  HarperTeen
Expected Publication:  April 26th 2011
Spoilers of Bk 1, 13 Little Blue Envelopes
From Goodreads:
Ginny Blackstone thought that the biggest adventure of her life was behind her. She spent last summer traveling around Europe, following the tasks her aunt Peg laid out in a series of letters before she died. When someone stole Ginny's backpack—and the last little blue envelope inside—she resigned herself to never knowing how it was supposed to end.
Months later, a mysterious boy contacts Ginny from London, saying he's found her bag. Finally, Ginny can finish what she started. But instead of ending her journey, the last letter starts a new adventure—one filled with old friends, new loves, and once-in-a-lifetime experiences. Ginny finds she must hold on to her wits . . . and her heart. This time, there are no instructions.
--------------------
The Last Little Blue Envelope is the sequel to 13 Blue Envelopes.  When we last left Ginny her backpack was stolen with her Aunt Peg's last letter tucked away in it.  After being okay with the fact that she will never know what that last letter said, she is suddenly back in the game.  Someone has found the letter..she can continue on the adventure her aunt sent her on.
What I like about the The Last Little Blue Envelope are the characters.  Many of the old characters are back, as well as some new ones.   I enjoyed The Last Little Blue Envelope more than the first book, and I think it's because of what the new characters bring to the story.  What do they bring?  I thought one brought mystery, and the other brought fun and enthusiasm.  This second book brings more vitality to the story as a whole.
I wondered why Maureen Johnson thought that 13 Little Blue Envelopes need a sequel, but I think her decision to continue Ginny's journey was a success.  If you liked/loved 13 Little Blue Envelopes you will like/love the sequel.
Posted by Melissa at 9:43 PM