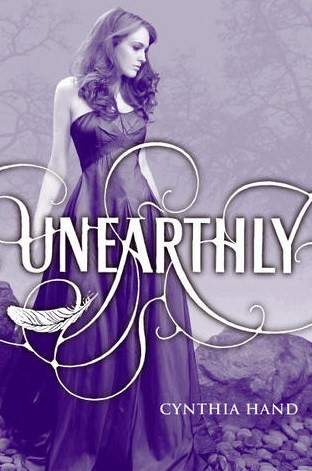 Unearthly
Author:  Cynthia Hand
Genre:  Paranormal YA
Publisher:  HarperTeen
Date Published:  January 4th 2011
From Goodreads:
In the beginning, there's a boy standing in the trees . . . .
Clara Gardner has recently learned that she's part angel. Having angel blood run through her veins not only makes her smarter, stronger, and faster than humans (a word, she realizes, that no longer applies to her), but it means she has a purpose, something she was put on this earth to do. Figuring out what that is, though, isn't easy.
Her visions of a raging forest fire and an alluring stranger lead her to a new school in a new town. When she meets Christian, who turns out to be the boy of her dreams (literally), everything seems to fall into place—and out of place at the same time. Because there's another guy, Tucker, who appeals to Clara's less angelic side.
As Clara tries to find her way in a world she no longer understands, she encounters unseen dangers and choices she never thought she'd have to make—between honesty and deceit, love and duty, good and evil. When the fire from her vision finally ignites, will Clara be ready to face her destiny?
------------
Angel books have been a hit or miss with me, and honestly I have yet to read a angel book that really wows me.  Unearthly falls somewhere in the middle for me.  I clearly liked it because I finished it in one day, but I didn't feel the wow factor.  I wasn't ready to yell from the rooftops "Read this book, NOW".
If you read the synopsis above you know that Angels have a purpose in Unearthly.  Your purpose starts coming to you through visions.  Clara's visions take her to a forest that is being ravaged by fire.  There standing in the fire's path is a boy.  Is her destiny/purpose to save this guy?  Clara and her family pack thier things and head to a new town where the mysterious boy lives.
The beginning of Unearthly was interesting because you learn about Ms. Hand's version of angels.  It's fascinating to compare what different authors bring to a certain subject.  I think somewhere in the middle is where it got somewhat tedious.  The high school hierarchy starts coming into the forefront, and my interest started waning, but then it picks up again.  Also I was a little lost with the black angel thing.  The whole of the book was about this "purpose" with bits of pieces about black angels, and then somewhere along the way the black angels came into play in a bigger way.  I don't know, somehow it felt disjointed.
My favorite part of Unearthly is the ending, surprisingly.  The ending is kind of open ended, and of course we clearly know there will be a sequel.  I was left with some questions, but I'm okay with having to wait to get the answers.
I think Unearthly is a good start to the series, and a decent good debut novel.  Ms. Hand will sure gain many fans from this book.
Posted by Melissa at 3:14 PM