Contains Spoilers from Bks 1, 2 and 3 of  the Mortal Instruments Series. 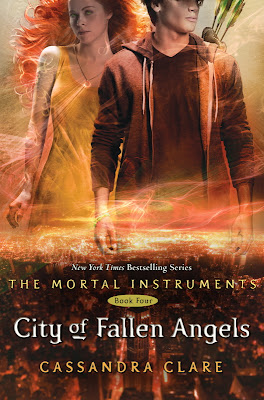 City of Fallen Angel
Author:  Cassandra Clare
Genre:  Paranormal YA
Publisher:  Margaret K. McElderry
Date Published:   April 5th 2011
From Goodreads:
City of Fallen Angels takes place two months after the events of City of Glass. In it, a mysterious someone’s killing the Shadowhunters who used to be in Valentine’s Circle and displaying their bodies around New York City in a manner designed to provoke hostility between Downworlders and Shadowhunters, leaving tensions running high in the city and disrupting Clary’s plan to lead as normal a life as she can — training to be a Shadowhunter, and pursuing her relationship with Jace. As Jace and Clary delve into the issue of the murdered Shadowhunters, they discover a mystery that has deeply personal consequences for them — consequences that may strengthen their relationship, or rip it apart forever.

Meanwhile, internecine warfare among vampires is tearing the Downworld community apart, and only Simon — the Daylighter who everyone wants on their side — can decide the outcome; too bad he wants nothing to do with Downworld politics. Love, blood, betrayal and revenge: the stakes are higher than ever in City of Fallen Angels.
------------------------------
I really love the Mortal Instruments Series, and I was content with how I thought it had ended.   Valentine was dead, as well as Clary’s evil brother Sabastian.   End of story, right?  Apparently, Cassandra Clare had more to tell, so the series continues.    I was just hoping I agreed.  Just like everyone that has read the Mortal Instruments series, City of Fallen Angels was a book I had to read.

It took awhile to read it for me.  I think part of it was it had been awhile since I was in the world of Shadowhunters, vampires, and werewolves, and the other part was the action was missing for more than half of the book.  We get a lot of romance, and talking about feelings, but one of the best things about the Mortal instruments series is the action.  Where was the action?  Other than that I thought City of Fallen Angels was very good.  Jace and Clary are finally together, maybe a little too much of I love you and can’t live without you, but still I like them so it wasn’t too nauseating.  There’s much more of Simon in City of Fallen Angels, in fact Simon is the key player in this 4th book.  Can’t go wrong in my eyes, I love Simon.
City of Fallen Angels is the weakest of the three, IMO, but still very good.  I can't see anybody who loves the first three books not liking this one.
Posted by Melissa at 5:48 PM