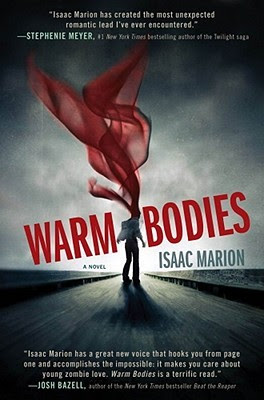 R is a young man with an existential crisis - he is a zombie.  He shuffles through an America destroyed by war, social collapse, and the mindless hunger of his undead comrades, but he craves something more than blood and brains.  he can speak just a few grunted syllables, but his inner life is deep, full of wonder and longing.  He has no memories, no identity, and no pulse, but he has dreams.

After experiencing a teenage boy's memories while consuming his brain, R makes an unexpected choice that begins a tense, awkward, and strangely sweet relationship with the victim's human girlfriend.  Julie is a blast of color in the otherwise dreary and gray landscape that surrounds R.  His decision to protect her will transform not only R, but his fellow Dead, and perhaps their whole lifeless world.

Warm Bodies will soon be hitting the big screen in the beginning of 2013, after seeing the trailer, I knew I needed to read it.  The trailer has a funny vibe, that isn't really there in the book, that was a little disappointing.

Warm Bodies is mostly about R, and his "life" as a zombie. Author, Isaac Marion, gives us the daily life of the zombies living in an airport.  They get married and are given zombie children, but really they are not even sure what that all entails since they have no recollection of what relationships are, more less how they feel.  They just shuffle along like idiots eating humans.  When R eats the brain of Perry (not a spoiler, it happens right away) R starts getting Perry's memories.  Most of these memories are of Perry with his girlfriend.  Perry spots the girl, and tries to protect her.  Slowly he starts getting feelings and is able to speak a little instead of grunting.  This starts a change in the undead, that hopefully will lead to a better life for the living.

As I mentioned above, I was expecting some humor, and though there was a little, it wasn't nearly enough.  Warm Bodies is still an interesting read.  R slowly changing into something more human and wanting to find out what is happening is what kept me reading.  I am slightly conflicted with the whole relationship though, because I'm not sure really where Julie (the romantic interest) is coming from.  Why in the hell is she not more frightened? Her reactions to R are a little  unbelievable, in my opinion.   I wish I knew a little more about her so I could understand some of her actions.  I enjoyed the simplicity of the writing, but the world building was lacking.  How did the world become what it is?  What the hell are the bonies?  So many questions and not enough answers.

I did enjoy Warm Bodies, but it is lacking a complete picture, but since this is a series, I'm sure we will be getting more answers.
Posted by Melissa at 12:47 PM