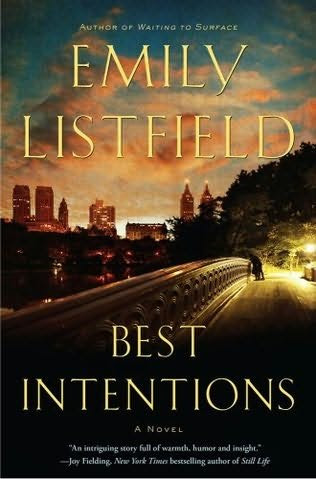 Best Intentions: A Novel
Author:  Emily Listfield
Publisher:  Atria
Date Published:  May 5th 2009
From Goodreads:
After tossing and turning all night, thirty-nine-year-old Lisa Barkley wakes up well before her alarm sounds. With two daughters about to start another year at their elite Upper East Side private school and her own career hitting a wall, the effort of trying to stay afloat in that privileged world of six-story town houses and European jaunts has become increasingly difficult, especially as Manhattan descends into an economic freefall.
As Lisa looks over at her sleeping husband, Sam, she can't help but feel that their fifteen-year marriage is in a funk that she isn't able to place. She tries to shake it off and tells herself that the strain must be due to their mounting financial pressures. But later that morning, as her family eats breakfast in the next room, Lisa finds herself checking Sam's voicemail and hears a whispered phone call from a woman he is to meet that night. Is he having an affair?
When Lisa shares her suspicions with her best friend, Deirdre, at their weekly breakfast, Deirdre claims it can't be true. But how can Lisa fully trust her opinion when Deirdre is still single and mired in an obsessive affair with a glamorous photographer even as it hovers on the edge of danger?
When Deirdre's former college flame, Jack, comes to town and the two couples meet to cele-brate his fortieth birthday, the stage is set for an explosiveT series of discoveries with devastating consequences.
Filled with suspense and provocative ques-tions about the relationships we value most, Best Intentions is a tightly woven drama of love, friendship and betrayal.
---------------------
Best Intentions showed promise in the first two pages with the prologue.  In the first couple of pages there is a murder, then it backtracks into "the beginning" of the story.  At first I found myself interested in what was going on these characters life, but around a fourth of the way in I realize I started caring less and less.  I never fully committed myself to any of the characters because I just didn't really care for them.  They seemed flat and I kept thinking I wasn't hearing or feeling the truth of them for some reason.  As for the plot line of Best Intentions it just didn't come together for me in a way I could appreciate and love.