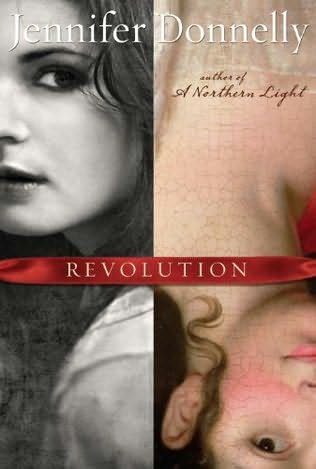 Revolution
Author:  Jennifer Donnelly
Publisher:  Delacorte Books for Young Readers
Date Published:  October 12th 2010
From Goodreads:
BROOKLYN: Andi Alpers is on the edge. She’s angry at her father for leaving, angry at her mother for not being able to cope, and heartbroken by the loss of her younger brother, Truman. Rage and grief are destroying her. And she’s about to be expelled from Brooklyn Heights’ most prestigious private school when her father intervenes. Now Andi must accompany him to Paris for winter break.

PARIS: Alexandrine Paradis lived over two centuries ago. She dreamed of making her mark on the Paris stage, but a fateful encounter with a doomed prince of France cast her in a tragic role she didn’t want—and couldn’t escape.

Two girls, two centuries apart. One never knowing the other. But when Andi finds Alexandrine’s diary, she recognizes something in her words and is moved to the point of obsession. There’s comfort and distraction for Andi in the journal’s antique pages—until, on a midnight journey through the catacombs of Paris, Alexandrine’s words transcend paper and time, and the past becomes suddenly, terrifyingly present.
------------------
When Revolution came out last year I wanted it...wanted it bad.  Everything about the book description interested me.  Then the reviews started invading my google reader and I wanted it
even more.
Ms. Donnelly had me through most of the book up until about 3/4 of the way.  All of sudden it got all WTF!  It was going so well..then bam we have time travelling (spoilerish highlight if you want to know)g.  At first I went along with it pretending all was well.  Hey, you never know maybe this had to be done for the storyline.  Sadly, no it didn't need to go there.
I guess I started with the one bad thing in all of the book, now on to the great things.  I love historical fiction, and contemporary fiction so this was the best of both world.  We are reading two stories, Andi's and Alexandrine's.  Andi's is being told present and we get Alexandrine's through a journal/diary that Andi discovers in a hidden compartment of a old guitar case.  I really enjoyed how both characters grow as their stories are being told.  At first I found it hard to connect or even like Andi.  I'm not down with that self loathing bullsh*t, and that's all she did in the beginning, but things got better between her and I not to far into Revolution.
I gave this a 4 rating on Goodreads because though it had some flaws I really enjoyed it.  It is kind of a depressing read though.
Posted by Melissa at 7:26 PM