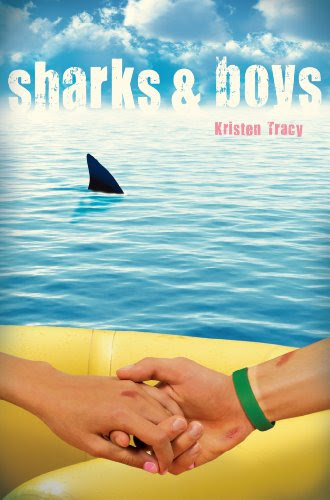 Sharks & Boys
Author:  Kristen Tracy
Publisher:  Hyperion Book
Expected Publication:  June 28th 2011
From Goodreads:
When 15-year-old Enid Calhoun follows her boyfriend Wick to Maryland for a party, fearful that he might be intending to cheat on her, she finds herself sneaking on board a houseboat where Wick and his friends plan to have a wild night. But before the boys discover their stowaway, a hurricane strikes, and the teenagers are carried miles from the shore and shipwrecked. What follows is a harrowing, yet heartwarming, story of survival, as the teens battle hypothermia, dehydration, man-eating sharks--and along the way, confront their own deepest secrets, including their catalytic roles in the disaster.
---------------------
I decided to give this one a try even if the reviews have been less than stellar. Hoping to be pleasantly surprised I picked my ereader Sunday morning and began.  By Sunday night I was done, and though it had some flaws I quite liked it.
What I liked about it:
1.  Love the title, and hey it had both Sharks and Boys, so it was not misleading.
2.  Surprising the main female protagonist wasn't whiny nor annoying.  She did occasionally have a brain fart moment, but who doesn't.  I also liked the other characters.
3.  Sharks and Boys was a unique story and I have not read anything like it.
4.  I liked the discussions they had.  I thought they were real, except for that one conversation (i'll get back to that).
5.  The many references to Jaws and Titanic.  I too would be thinking about those movies if I was in a similar situation.  Is that weird?
5.  The ending was good, and honestly I never got bored.  I thought it was intense and interesting, Like MTV's the Real Word but on a raft in the middle of a shark infested ocean.
Now what didn't make a perfect book and Sunday:
1.  The fact that Enid wondered about the situation between her and Wick. Are they together or not?  She actually got happy he called her his girlfriend.  Who freakin cares if he's your boyfriend!  You are in a raft with sharks all around you with no water or food.  You are in a shitty situation whether he's your boyfriend or not.
2.  The conversation (pertains to #4 above) about Wick maybe possibly cheating on Enid with some girl name Simone.  Didn't happen, but it could have happen had they not been instead in a raft with sharks swimming nearby snapping their jaws at them.  In the situation as such do you honestly care whether you have been cheated on.  Actually I think it would be the perfect time for your significant other to admit such transgressions due to the dire dilemma you are in who cares, and if you make it you would be so glad to be alive that you will be so busy smelling the roses, kissing the ground and traumatized that you will probably forget the confession.
If the book description sounds even remotely interesting I think get it a try.  I wasn't disappointed maybe you won't be either.
Posted by Melissa at 12:10 AM